In MK4 model form, the Toyota Yaris has been further Europeanised with sharper styling, a better quality interior, improved media connectivity and significant changes to its segment-leading hybrid engine. What was already a class act has just become genuinely hard to overlook.

If you were asked to name the cars vying for the title of best supermini, it would be a reasonable wager that the Toyota Yaris wouldn't be amongst your top three. If, on the other hand, you had to name a small car that would be trouble-free, cheap to run and easy to use, it would be right up there. The thing is, those criteria are exactly what many supermini buyers are looking for. They don't care if the car can't take the Esses at Donington flat without lapsing into understeer. It's an irrelevance for most but car magazines still put a huge priority on handling and award their 'best of' titles predominantly on which cars are most fun to drive at the limit.

The Yaris has always been a supermini that works well in the real world and this fourth generation car is no exception. It has long lacked a bit of flair though, and Toyota has belatedly realised this, endowing the latest model with a lot more styling input, as well as engineering improvements. It's now exclusively a self-charging hybrid.

Here, Yaris buyers won't get the conventional 1.0-litre and 1.5-litre petrol engines offered with the car in other markets. That's because the brand thinks customers will want the self-charging hybrid version. This electrified variant features a new 1.5-litre petrol powertrain mated to a CVT auto transmission that's claimed to be more linear in response than the old Yaris Hybrid 'rubber band'-like set-up. The electrified petrol engine is 1490cc in size but has the same bore, stroke and piston size as the 2.0-litre hybrid unit that Toyota uses in the Corolla. Maximum engine power is 90hp, the combined system output is 114hp and there's 120Nm of torque. This car makes 62mph in 10.5s en route to 109mph.

The brand reckons that the new lithium-ion battery will be able to drain and recharge more quickly than the previous unit, which means that it will be able to provide more of an electric surge through the 79hp electric motor. As a result, the company expects that over 80% of urban journeys in this car will be able to be completed under electric power alone. On all models, ride quality should be better thanks to suspension tweaks and a considerably more rigid body.

The Yaris takes its styling influence from the current Corolla family hatch, the panel work adopting various creases to give it some extra flair. Pronounced blister feature over the wheel arches, plus there's complex surfacing over the rear doors - and the car is both lower and wider than its predecessor. Unusually and against the current trend, this MK4 design is actually slightly smaller than the one it replaces, measuring in at 3,940mm - most supermini rivals are over 4 metres long. As usual, of more importance is the stuff you can't see - namely the new generation 'GA-B' platform this car sits upon.

Inside, you'll notice features more commonly seen in larger cars, including a large 10-inch centre-dash infotainment touchscreen. 'Apple CarPlay'/'Android Auto' smartphone-mirroring is standard. There's also a further TFT information display between the two instrument binnacle gauges. The driver's seat positions you a little lower than before (36mm lower to be exact) and there are plenty of soft-touch materials around the cabin. The dashboard has been made slimmer and is set lower, with a wider and higher centre console. The driver's instrument binnacle has twin digital meters flanking the TFT multi-information display, and is presented with a shallow hood. Last, but not least, the steering wheel size has been reduced. The rear part of the cabin isn't especially spacious, but the boot area is of a versatile size and is enhanced by a variable-height boot floor. 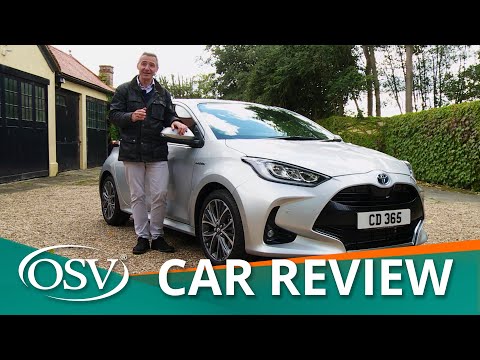 BUY, LEASE OR FINANCE A TOYOTA YARIS FROM OSV: https://bit.ly/2H1Sog6 In MK4 model form, the Toyota Yaris has been further Europeanised with sharper s...